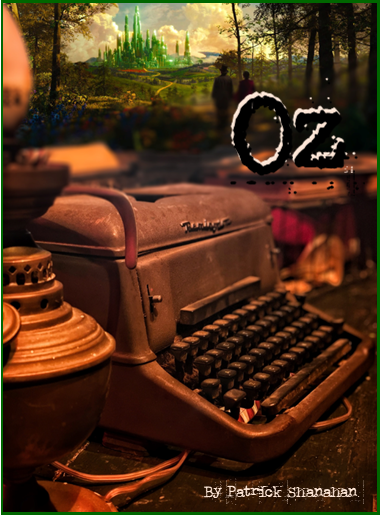 Description: L. Frank Baum is in trouble—forty-four years old and on the eve of his greatest creative work—he is a "jack of all trades" but success eludes him. It is 1899 in Chicago and Baum is putting the finishing touches on The Wonderful Wizard of Oz, but putting dreams on paper is elusive business and Baum is struggling with some definite plot problems, no title and no ending! Like the cyclone in his story, Baum's housekeeper, Bridgey, and a little girl named Dot get swept up in the mad vortex of his tale, as Baum enlists them to help him improvise the story. Suddenly, an overstuffed Victorian study becomes a magical land, a black, horsehair footstool becomes Toto; a ceiling fan with scarves becomes the cyclone; stuffing from the sofa, a potbelly stove and a bearskin rug become the Scarecrow, the Tinman and the Cowardly Lion. Somewhere, in the heart of this frenzy is the whole creative process, and in the end we realize that Baum is the real wizard of Oz, but he needs an assistant … our imaginations. After the Kansas City world premiere, Oz went international in a spectacular production at London's famed Unicorn Theatre. The resulting critically acclaimed production developed and resulted in a more dramatic, expanded script which is available manuscript form. The staging of Oz has a wonderful flexibility and infinitely creative process as shown in the two versions of the same script and its many productions across America.

Pre-purchase your tickets to any opening weekend show and

​Get entered into a special raffle (One winner per night)

Get a second raffle entry by joining in the fun with what you wear:

​Second Sunday Talk Back: Directly following the show of our 2nd Sunday! After the performance, we bring the Cast, Tech, and Directors of the production to the stage for an informal discussion with the audience. A Talk back is the perfect opportunity to get the inside track on what goes into every show! Begins 5 minutes after the show to give escape time to those that don't wish to stay... but you should try it! So join us and TALK BACK!

Please be sure to check out our protocols before purchasing.

There's a weirdness in our website that takes away the buttons beside the date to press. Please press the date you'd like to purchase, then it will allow you to choose quantity of tickets you'd like. THANK YOU!